Our Commitment to Diversity, Equity, and Inclusion 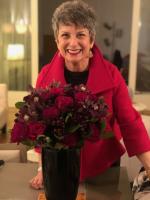 Esther is a co-owner of Howe-Lewis International. She is passionate about and committed to the not-for-profit community and works with a broad range of local, national, and global clients to identify and attract leadership for this dynamic and growing sector. The HoweLewis approach is highly tailored, consultative, and hands-on. Esther started her career working with her alma mater, Case Western Reserve University, and later worked in development with the Metropolitan Opera and Statue of Liberty-Ellis Island Foundation.

Discovering that her early experience provided the perfect platform from which to launch into executive search, she joined Korn/Ferry for several years and then had an opportunity to join a small, nimble west coast-based firm looking to grow and to establish an east coast presence, and ultimately became an owner of the firm.

Originally from Cleveland, Ohio, Esther attended the American University of Paris and received both a BA and an MA in French from Case Western Reserve University. She is a frequent presenter and speaker and is active with Women in Development, New York, the Association of Fundraising Professionals, Women of Color in Fundraising and Philanthropy’s Allies in Action TM, and the Network of Nonprofit Search Consultants. She is also a board member of Playwrights Realm.